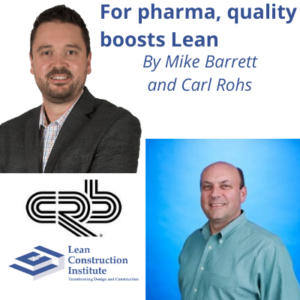 Could an increased focus on quality among manufacturers and others in the life sciences sector signal a move toward greater adoption of Lean construction principles?

A shift in that direction—found in the responses to a survey of more than 500 industry leaders—is heartening to those who recognize the myriad benefits Lean methods like integrated project delivery (IPD) offer over more traditional models, such as design-build (DB) or design-bid-build (DBB).

Answering questions in CRB’s “Horizons: Life Sciences” survey, distributed in mid-2021 and published late in the year, 39% of respondents ranked quality ahead of scheduling (31%) and cost (30%).

While it’s encouraging to see quality rank ahead of the pack, it’s also positive that there’s so little space between all three drivers. The overarching goal of a Lean approach is to deliver projects that are on budget, on time, and that provide optimum quality. Seeing a close balance between quality, schedule, and cost here reassures us that there is movement in the sector, even if it isn’t as fast as Lean proponents may like.

Traditional construction methods dominate, but there are signs of growing discontent.

DB and DBB remain well ahead of the pack as clear favorites. More than 60% of organizations continue to choose DB or DBB models for project delivery, with engineering, procurement, and construction management (EPCM) lagging slightly behind DBB, and IPD at just 13%. EPCM’s popularity is encouraging since, in many instances, it has become something of a mesh of approaches, utilizing some of IPD’s collaborative approaches to create a hybrid—something approaching “IPD lite.”

The movement toward Lean approaches is higher within primary pharma manufacturers; for example, we noted that only 6% of respondents at contract manufacturing organizations favored IPD.

Of course, DB and DBB have long-established benefits, including on-time delivery and a single point of responsibility. In particular, DBB continues to be popular with those who want a well-defined, regulated bidding process, as well as DBB’s ability to drive bid prices down and secure a lower upfront cost.

But both approaches have well-known drawbacks.

DB can require significantly more project oversight and places a large amount of risk in the hands of the project owner. It can also add costs for embedded contingencies, like waste, if the risks are assumed by general contractors or contractors.

DBB can help companies minimize their initial capital spending, but it also increases the risk of cost and scheduling overruns, and means higher risk for owners should cost overruns occur. DBB is also prone to litigation if things go wrong.

These downsides clearly aren’t news for survey respondents. Less than half of those who use DBB are either extremely satisfied or somewhat satisfied with the model, while the same satisfaction rating for DB is under two-thirds, five percentage points behind IPD’s ranking.

The EPCM method ranked below DB and DBB for usage, but those who do use it, like it.

It’s no surprise to us to see IPD trailing the field; after all, the Lean principles that underpin the model are still relatively new to pharma, and IPD itself has only been an alternative option for about a decade.

But, even at smaller organizations, IPD has made some inroads, as seen in the 58% bulge of those with some familiarity of Lean design. Even more encouraging is that those who are familiar with the approach have a good handle on the importance of the collaborative nature of Lean, placing that attribute well in front of other characteristics.

The disconnect between how many survey respondents rely on DB/DBB and how few report feeling satisfied with the outcome raises an obvious question: What’s keeping organizations from moving—if not to IPD itself, at least in larger numbers to what we think of as IPD lite?

In a word: procurement.

While 90% of respondents say their organizations are open to switching to a Lean approach, 60% say procurement-method constraints are holding them back.

As noted, DBB places a lot of emphasis on the procurement process, which in many cases is siloed and fragmented, and both DBB and DB appeal to those who want the assurance of a competitive upfront price based on scope. But other sectors like healthcare and automotive and industrial manufacturing have shifted away from DBB toward IPD methods and surely, they too are driven by cost control. What’s the barrier for pharma?

In our experience, many companies believe that the substantial amount of regulation in place on DBB projects helps to ensure fair, transparent bidding processes. In a highly regulated sector, a lot of additional work is needed to prove that you’re compliant when attempting something new. If you want to consider why sectors like healthcare and automotive and industrial manufacturing have been faster to adopt IPD methods than pharma has, regulation is a good place to start.

Strong, effective regulatory oversight is all to the good, but too much focus on upfront pricing can preclude the benefits of collaboration, shared risk, and simultaneous implementation—to cite just three of the leading benefits of IPD.

The fact is, a lot of the incumbent procurement leaders have lived their careers with DBB and DB, and they’re reluctant to consider the alternatives. What’s more, the way key performance indicators are structured at many organizations means there’s no incentive for change.

Where are we on the path to broader recognition of Lean’s benefits and wider adoption of its principles?

We can’t kid ourselves; if it’s a 10-step path to universal acceptance of IPD, we’re probably at about Step 3, and reaching full acceptance won’t likely happen in this decade. But there is movement, and a clear recognition of the edge that Lean approaches can help provide over traditional models.

Mike Barrett is the Vice President of Project Delivery Services at CRB, and a champion for Lean execution methods. He has vast project experience including over 200 life science projects totaling nearly $1 billion. Mike is passionate about building collaborative, focused teams that have deep levels of trust, all working toward a common project purpose. Connect with Mike on Linkedin.

Carl Rohs, Senior Project Director, CRB has more than 30 years of experience building life sciences facilities and focusing on the continuous improvement of project execution. He is skilled at implementing Lean practices on capital projects, and building a strong culture of trust and commitment with his project teams. Connect with Carl on Linkedin.