What is Lean? [Plus, Free Lean Construction Tips & Tools]

Home » What is Lean?

What is Lean?
(Lean Thinking)

An Introduction to Lean

What is Lean? First and foremost, it’s important to think of Lean as a mindset rather than a technique. Lean requires buy-in from a team that is focused on continuously improving working processes to seek the best possible outcomes. Ultimately, Lean is a shift in how a team works together.

The goal of Lean is to generate more value for customers and stakeholders. Lean improvement methodologies achieve more value by the removal of waste in processes. A successful Lean enterprise accomplishes all of this by opening up the lines of communication between parties and by instilling trust among teams and team members.

Lean is a culture of respect and continuous improvement aimed at creating more value for the customer while identifying and eliminating waste. Across the construction and design industry, Lean as a process, a culture and a way of thinking proves to be effective in doing just that.

Lean can be applied to many different industries. Today, it’s primarily used in…

The Purpose of Lean

Lean technically dates back to as early as 15th century Italy, but the modern Lean principles were developed by Toyota following World War II. Toyota’s founders built upon many of the systems that made Henry Ford so successful in mass production of vehicles.

In true Lean fashion, Toyota sought continuous improvement and turned Ford’s weaknesses – overproduction and a lack of customization – into strengths. This is how the Toyota Production System was born.

Toyota made a number of improvements, including the discovery that it could use a pull system to ensure it was only using materials when they were really needed. Toyota operated based on its 14 principles of Lean which still guide the company today.

Lean thinking also involves the implementation of ongoing line of communication from within specific teams and without; those in charge of each team must communicate with all others on their team and also with other teams involved on the project.

While Lean has to be led and supported from the top, it’s crucial that the implementation happens at the most basic level of the operation. Those who are on the ground delivering the value are the most critical cog in the machine with regards to delivering the value efficiently while eliminating waste.

Many in the Lean industry believe that there are five main principles of Lean methods. The five commonly-referenced principles are:

We start with Respect for People because it is paramount that any Lean production process features a healthy amount of respect, both for the customers and for fellow team members. A Lean enterprise without a foundation of trust is a failing one from the start, even if that organization adheres to the five core principles listed above.

In the design and construction industry, many organizations become concerned only with their individual part of a project. They seek to get in, do their part, and get out. Any successful Lean practice will ask: how can your process benefit not only your work, but also the work of those who came before you and those who come after you on that project?

A rising tide lifts all boats, and more can be accomplished together if everyone seeks to produce the best overall outcome rather than simply the best outcome for their individual piece of the puzzle. In fact, many Lean contracts include clauses to split profits across all facilitators of a project which is delivered (using lean tools) on-time and on-budget.

The Lean Construction Institute recognizes eight different types of waste that can be found in modern production processes. A shift to a Lean mindset means getting into the habit of looking for and reducing waste in current processes.

Flow is the notion that every team involved in a project can get their work done smoothly and unimpeded by the work of others on the project. Reducing wait times and removing constraints is a major component to Lean. Once teams learn to communicate with and trust in each other, they’ll find that their flow is greatly enhanced, thus improving productivity.

Value can be thought of as the opposite of waste. Something that is value inherently cannot be wasteful. It’s critical to identify the value proposition in the project you’re completing and then to tailor your processes to generate as much value as possible.

Implementing Lean methods into a process means continuously improving processes to improve flow, generate more value, and eliminate waste. Lean methods often use what are called PDCA processes: Plan, Do, Check, Adjust. Plan the process that you want to utilize, implement the process, check to see where you can improve upon that process, and take action accordingly to optimize outcomes.

There are many practices Lean experts use to maintain flow in their processes. Some effective Lean practices include:

Lean tools help people to implement Lean practices in their processes. Some Lean tools include:

The Lean Construction Institute is committed to transforming the design and construction industry by providing educational resources, conducting surveys and research, and facilitating local and national Lean events. It is only through the power of the LCI Corporate Members that LCI is able to offer the supplementary resources below. 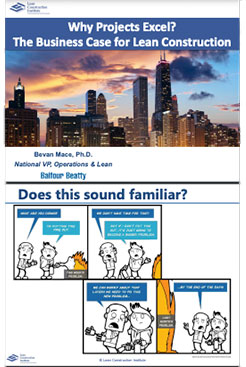 LCI Research: Why Projects Excel
LCI-funded research efforts show that projects with a high Lean intensity are more likely to be completed ahead of schedule and under budget. Get an understanding of Lean by reading why it improves productivity, safety and value.
DOWNLOAD FREE 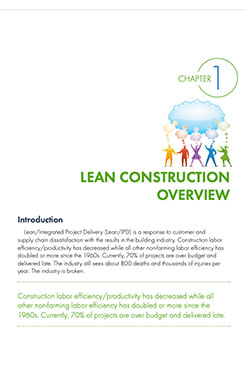 Lean Construction Overview
Lean construction is a relationship-based system that is founded in commitments and accountability. It significantly improves trust. Teams are integrated through collaborative tools... Download to read more!
DOWNLOAD FREE 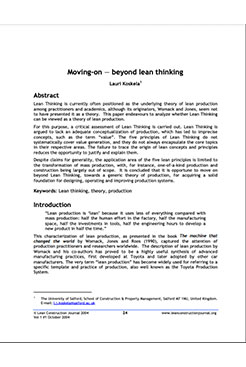 Moving on - Beyond Lean Thinking
Download this resource for a detailed understanding of Lean Thinking. Touching on the who, what, when, where, how, and why, this white paper is perfect for the beginner Lean practitioner.
DOWNLOAD FREE 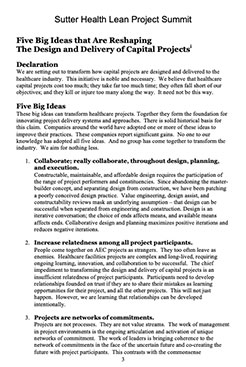 5 Big Ideas of Lean Construction
These big ideas can transform healthcare projects. Explore this white paper to see how Sutter Health is transforming how capital projects are designed and delivered to the healthcare industry.
DOWNLOAD FREE 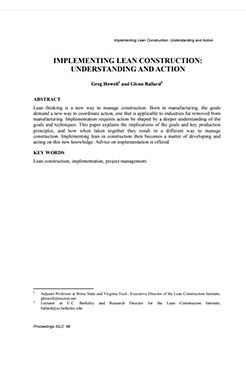 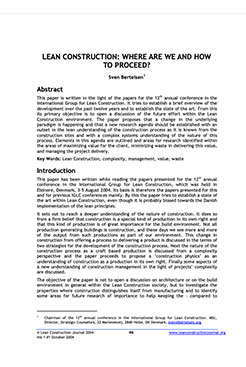 Lean Construction: Where are We and How to Procceed
Download and read the paper to further your Lean journey.
DOWNLOAD FREE
eLearning Courses
Back 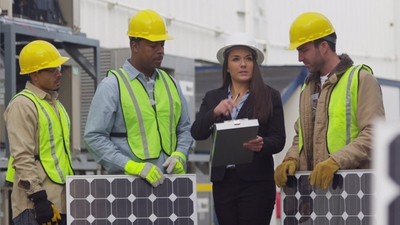 Introduction to Lean Project Delivery
Gain insight to Lean Project Delivery (LPD) by understanding how the Lean System connects People, Principles, and Practices to optimize results by shifting both mindset and behaviors. The key achievable goal of this course is to prepare and enable team members with a foundational understanding of Lean approaches for daily use within a project environment.
Learn more 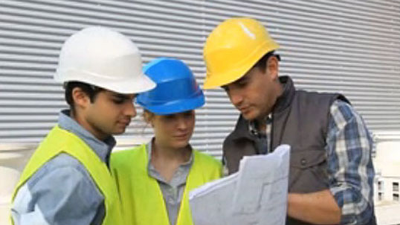 Introduction to the Last Planner System®
This course will allow you to gain in-depth insight to the practical application of the Last Planner® System (LPS) through multimedia, hands-on interactions, diagrams, worksheets, and more. The key achievable goal of this course is to learn how to engage at all five levels of LPS effectively on a day-to-day basis with a team implementing the system.
Learn more 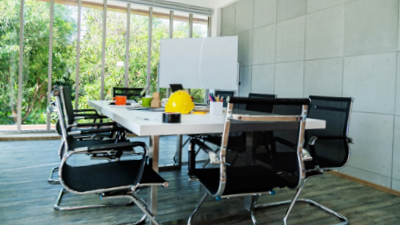 Effective Big Room
Gain a foundational understanding of the concept of a Big Room by learning the benefits, purpose, and implementation considerations. Understanding how to improve collaboration and drive transparency within your team. Identifying venue types, set up, and activities that work best for your projects. Learning how to effectively advance work and learning to support the success of future projects.
Learn more 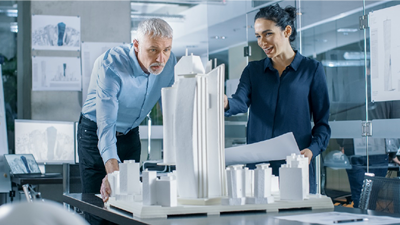 Lean In The Design Phase
Gain insight to Lean approaches and tools relative to the design phase of project delivery to optimize team communication, collaboration and results. Understand how a Lean strategy can drive innovative solutions by connecting People, Principles and Practices. The key achievable goal of this course is to prepare and enable team members with a foundational understanding of Lean approaches for daily use within the design phase of a project.
Learn More 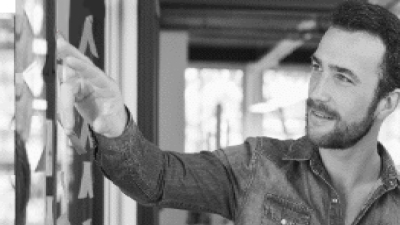 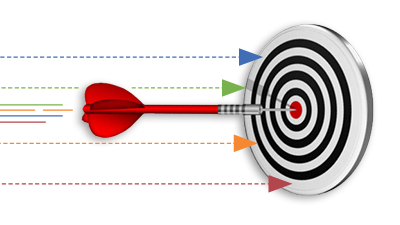 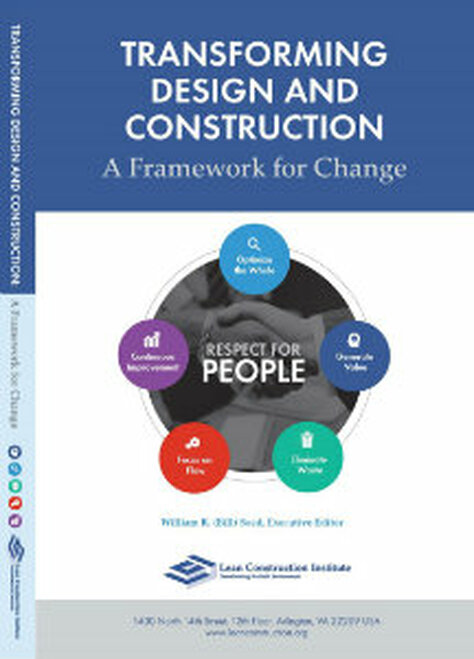 Transforming Design and Construction: A Framework for Change

A diverse set of practitioners collaborated to create the Transforming Design and Construction: A Framework for Change book based on the transformative projects and experiences of their Lean practices. The papers, presented in short chapter format, are intended to encourage discussion, learning and experimentation individually or with a team. Read the first and most popular book in LCI’s Transforming Design and Construction series to gain a high-level understanding of various Lean principles, strategies and methods.
Purchase

From 5s to IPD, explore more popular Lean design and construction topics below.