Unstoppable Lean – A story of Building a Lean Culture

Unstoppable Lean – A story of Building a Lean Culture 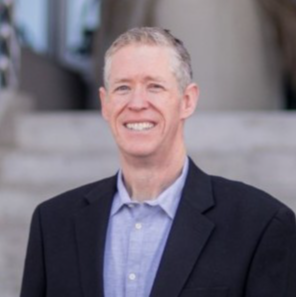 Often when an individual or an organization strives to change things for the better, and the effort fails, the memory of that failure lasts a long time. As a result, this can often lead to not wanting to try again. Such was the case with McCarthy’s Southern California region’s Lean journey. The partners that had been around for a while knew about Lean but had seen it fade away; others who were not aware of Lean or Lean practices were busy trying to complete their projects and assignments. At the beginning of 2020, when the SoCal region re-committed to bringing back Lean and Lean principles, many challenges existed. When you add COVID-19 into the equation, it would seem like an impossible task to begin to change the culture.

One week into my new role of re-starting Lean, the office was forced to close, and everyone was asked to work remotely. Projects were scrambling to keep the work moving forward, people were figuring out what working remotely looked like, and senior leadership was trying to deal with all the mandates, rules, and regulations that were changing what seemed to be weekly. This was the environment I found myself in when trying to add even more change to an atmosphere of chaos. A project manager asked me why this time with Lean would be different. My answer to her was simple; this was now my career. If Lean failed, I failed and would be looking for another job. With that in mind, my motivation for Lean to succeed is extremely high.

The great thing about the Lean community is that everyone is willing to share their ideas, successes, and failures. One of the first things I did was to reach out to my counterparts in the industry I knew and asked them to tell me their story. This group included trade partners, other general contractors and consultants. Some said to start small, while others had very detailed programs and took Lean everywhere. I decided to start small.

The first area we addressed in changing the culture was making people aware of Lean and the tools available for use. We accomplished this by reaching out to project teams and conducting a lunch and learn presentations for 45 minutes. This visibility led to two separate internal Lean teams; one team was the Lean Project Champion team and the other was a Continuous Improvement team. The Lean Project Champion team was a way to stay engaged with the projects and to have project team members share ideas to encourage one another. The Continuous Improvement team consisted of senior leadership, with the sole purpose of increasing Lean awareness and changing the culture. The goal of these two groups is to create an environment where individuals would become Lean supporters and talk to their peers about the benefits of Lean, thus become self-sustaining.

While visiting the project sites, I discovered that our teams were coming up with creative ideas and solutions to problems. One of my goals was to document those improvements and add them to the presentation to show what other McCarthy partners were doing when I went to the next team for the Lean lunch meeting. After a short while, the presentation was no longer about Lean concepts. It was about McCarthy partners using Lean tools on their projects. Lean was no longer hypothetical; it was now actual. This was a tipping point, no longer a person just talking about Lean; it was seeing Lean in action by peers.

Whenever change is proposed, it is met with resistance naturally. When I talk to a team and suggest trying something new, the automatic answer is no. This response happens a lot, but I always ask why. If there were ways to work around their concerns, I would modify my proposal to see if the team would try something new. We constantly look for home runs with our teams, but singles and doubles win games. Even if a team would only try a small part, I would always celebrate that as a success.

My experience with the Last Planner System® (LPS®) started over 10 years ago on the John Wayne Airport Terminal C project with Dan Fauchier (I included Dan’s name since he is my Coach, Mentor, and Friend. I would not be here without him). Before re-launching Lean in 2020, there had been pockets of success using LPS®. However, it was not viewed by many as a helpful tool. I would talk to teams and the Project Schedulers to determine if LPS® would make sense on projects. I would also engage the Project Executive about using LPS® on the project; no one likes surprises. This led to Superintendents who are adamantly against LPS® using the process and finding value in it. As previously stated, change is met with resistance which is why we must get buy in from all parties to get Lean approaches to succeed.

It seems there is an application or software for every problem in the digital age. However, you must first log in to the app or the software to see that information. This conversation with a project team led to using visual management to communicate important dates to everyone on the project. Signs were made with important dates for when the material had to be removed from the floor and when the substantial completion date was for the project. Signage was placed all around the project site by the entrances of the restrooms inside the building, so that every trade partner knew these critical dates.

All the above successes would not have been possible without the support of Senior Leadership, specifically the Regional Executive Vice President of Operations, also known as my boss. He and I would meet weekly (virtually, of course, this was in the worst days of the pandemic), and he would make sure that my actions aligned with the vision of where McCarthy wanted Lean to be in the region. He made sure I was on the agenda at Senior Leadership meetings, highlighting the projects’ wins and sparking interest from leadership to have Lean be presented and used on their projects. I am convinced that I would not be writing this story today without his support.

This culture change has not been instantaneous, and it is not complete, but that is all right since the journey is one of Continuous Improvement. 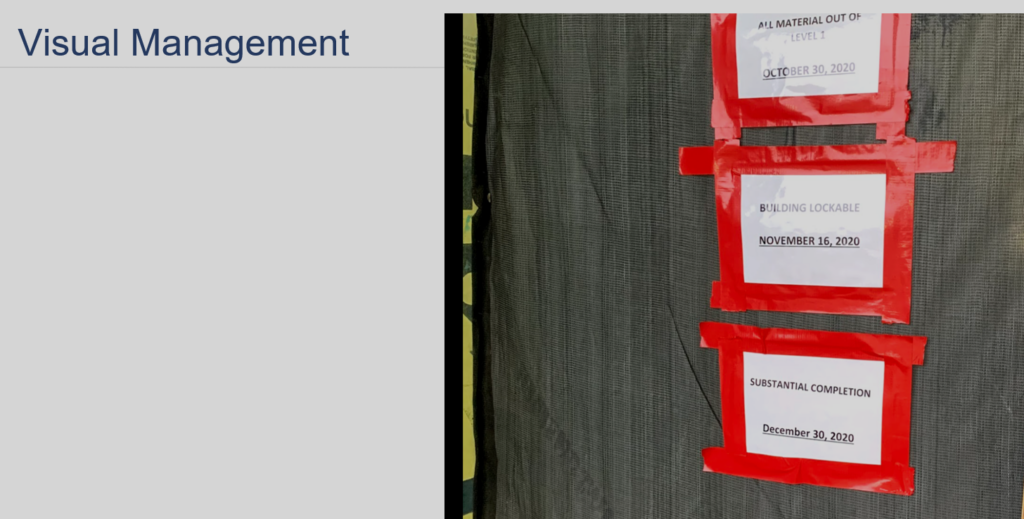